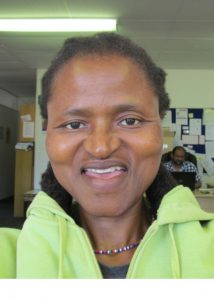 Martha Qumba resides in Cape Town, South Africa. She is a student at the University of the Western Cape, doing Geography, Philosophy and English. This year, she was among the students who participated in the Creative Writing workshop, Taking Liberties, hosted by Graham Mort at the university, English department.  The purpose and focus of the workshop was for participants to explore the notion of freedom in contemporary South Africa and also to also sharpen and develop their creative writing skills.From the workshop she learnt some important techniques like how use certain objects in writing a poem also how these objects can be used as a tool to convey hidden messages of freedom in particular. Another useful thing was the importance of using metaphors in a poem especially when the poet challenges some certain doctrines or the poet’s responses to those doctrines.  One fascinating lesson for her was when Graham used a kind of a cupboard knob, asked the students to write what they think about it, that it is a symbol of freedom. Martha is a freelance journalist also a script writer. She writes poems, short stories and children’s book. In 2016 she launched her first children’s book, How Whitey is Different from Darkie, and it was translated into seven official languages of South Africa.

In a pierced Space

In a pace of pierced

A place of displaced

Of pieced and pierced

The space of the displaceable

A space of pace

A piece of space

Peoplaspiace stems from Migration course taught by Professor Daniel Tevera at UWC and it is based on the experiences of black migrants in the diaspora. It’s a combination of words ‘space’, place, ‘people’. It paints my experiences of being black also the experiences of other black migrants. When migration occurs there’s always a contestation of spaces between the people the local people and migrants, these contestations sometimes have unpleasant results. This poem in particular talks about the emotional experiences and treatment they get in return.  It captures their hurt that a space can cause to them and end up being displaced.

Again, it shows that their feelings are not considered because of their blackness and they deserve it, so to speak.  It doesn’t only look at migrants however the consistent evictions happen to black people all over in South Africa. I have, in my mind, people who live in shacks and backyard dwellers. Recently, in Cape Town, there was a riot where poor black people were just occupying any open space and the way they were evicted. It’s a daily phenomenon and it has become like a ‘black curse’. It also addresses the issues of freedom, poverty, oppression, slavery, and resistance, on one hand how neo-liberalism functions in the country.

In a country where freedom for all is being emphasised, Peoplaspiace tries to interrogate that notion whether this term is just a way holding people to that far-fetched hope. Too, with this poem, I’m trying to tell the world that in this world there’s no space, peace and place for blacks. I trust that blacks in the diaspora would be able to relate to it and see the difficulties of being black. I know, too, that it’s a sad poem but it doesn’t want people to be sad.  The struggle continues. Be aware!

How Whitey is different from Darkie, a children’s book (Saliwa) 2016