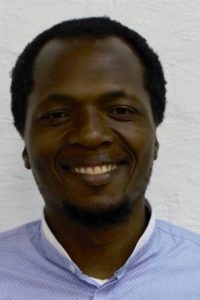 Nkosinathi Sithole is Associate Professor in the English Department at the University of the Western Cape. He studied for the BA and BA (Honours) at the University of the Witwatersrand (where he studied African literature, History and IsiZulu) and the University of KwaZulu-Natal where he attained his MA and PhD degrees in English Studies. His areas of interest include South African and African literature, African languages literature, Oral Literature, and Religion and Spirituality. He is also interested in creative writing and his first novel Hunger Eats a Man (Penguin SA, 2015) won the Sunday Times Barry Ronge Fiction Prize and jointly won the University of Johannesburg Debut Prize for South African Literature in English. He started writing poems and short stories in IsiZulu when he was still an undergraduate student at the University of the Witwatersrand. The collection of IsiZulu short stories won the Ernst van Heerden Creative Writing Award in 1998. As an academic and writer he is interested in the interface between African-Languages writing/IsiZulu writing and (South) African Literature by Black writers. Hunger eats a man was initially self-published with an IsiZulu version called Indlala Idl’ Indoda.

When I close my eyes, I see

It’s been many years now.
I am standing on my little hill
hoping to see it all;
my eyes simply shut and
then I see dead bodies.

When I shut my eyes
I see machine guns destroying
and Retief’s bazooka laying to waste
my nation fighting for dear life
stitched to the ground by the spear.

I then see his hands red
with the blood of the innocent,
dirtied with sin, ‘thou shalt not steal’.
I see my elder brother wailing,
life is hard. For some hard is easy.

I hear the noise of lament
issuing from women in the huts,
seeing loin-skins turned upside down,
heading upwards following the souls,
and bodies remain quiet but not still,
as the light-eared jump over them with joy.

I thank you, Father Peter,
for bringing wisdom in the Africa
of our forefathers who were idiots,
who could do nothing worthwhile;
by taking from them all their land.

And to you missionaries I give praise,
for building a nation that knows
that black traditions
are barbaric and must be crushed;
only whites have God on their side,
for they are civilized and wise.

I wrote the poem “Namuhla ngibona ngicimezile” many years ago when I was still an undergraduate student at the University of the Witwatersrand. I have made very little changes in the translation, but have kept the original as it has been. During this time I was being introduced to African Studies, but learning it mostly from the perspectives of History, African Literature and African Languages. It felt to me like an enlightenment period where I got to know myself, perhaps for the first time, as an African; a proud African. Through the poem I was trying to reflect on the issues of colonialism and the civilizing mission. I was amazed to be taught by white scholars who were not shy to talk about and critique colonialism and the cultural imperialism that went hand in hand with the civilizing mission. I think the poem was a response to a series of lectures on colonization and missionization. In one of the lectures I learnt that in one of the African countries Africans would have their hands or fingers cut off as punishment for not doing their work or for doing what they should not have done. I could imagine the pain those people must have felt. This is the paradox of colonial discourse and the civilizing mission because there were many examples of barbarism that came with colonialism but the rationale for it was that it was saving Africa from itself. They were civilizing the barbarians while in fact they came with their own barbarians!