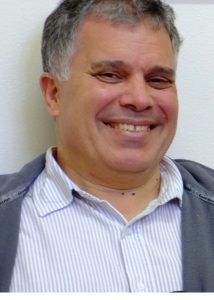 David Schmidt teaches, writes and consults about public leadership, urban governance and public policy.  He has worked for city government, for NGOs and as a consultant. He has been involved in social change since his student days and serves on the boards of various development and education NGOs.   He is married and has two daughters. He once came third in a song-writing competition and is currently immersed in a Masters in Creative Writing at U

Lorca’s Lover:  An Account of a Life in One Room in One Moment

I live in a room that is crumbling away and I am trying to remember his last poem that is hidden somewhere in the walls and a layer of paint bubbles up and peels off revealing the layer below, telescoping me back in time not sure if it is the room or my memory that is collapsing in on itself suffocating me like a coffin and I scream poems of dark love to no-one. I live in a room where the rats come out in the dark through holes in the floor and eat the peanut butter I leave for them on the bookshelves because they have finished off the remains of the volumes of verse that once fed them and I have papered over the darkness of the walls with newsprint to ease the years and a simple table sits in the centre under a hanging light, an Underwood typewriter on it that I use to tap out articles on architecture for cultural magazines that all start with a room because a room is always changing with so many shifting stories concertinaed into it, even as the building that contains the room remains the same. I live in a room with the walls black after the fire with the sky of night above me, the moon waned to a sliver and on one wall I have etched in the charcoaled paint with my finger his words only mystery makes us live, only mystery that somehow express my grief for I cannot explain what drove me to rampage across the Russian steppe or why bleeding out gladly in the snow with everything burning down around me I found my way back. I live in a room where I can still find small traces of him, a strand of his long black hair in the dust under the bed or a clipping of a fingernail caught between carpet and wall and I have painted the walls blood red to represent my family’s shame in me and mine in them and his blood was spilled in an olive grove, I leave one small corner unpainted where he had written in tiny letters even I was not supposed to find Ay, the pain it costs meto love you as I love you!  I live in a room where he paints wild horses galloping across the Andalusian plain on one wall, spring blossoms against blue sky the free air of Harlem on another, day of the dead processions from Mexico, land of our dreams and in the middle of the fourth wall is a teak door from the Amazon carved with fertility icons and my father bolts it from the outside so I cannot escape with him to Acapulco even as we hear the banging hammers of the steel being sharpened in the Granada armoury. I live in a room of painted scenes from Shakespeare plays and Spanish operas, I was born to be a performer, beautiful and desired as a boy, ready to take the world, I draw a straight black line tight around the room and tell my mother it signifies my fealty to art and I lie on my bed looking up at the full moon on hot nights with water pouring over me for the line is the tightrope I am walking and it is there that he found me. I live in a room in a cot with white walls under an embroidered boy-blue blanket full of the smell of eucalyptus oil that my nanny rubs into my chest and my father is making cooing sounds and I look up at him, he looks like Federico until I see the brush-metal moustache, I can hear the fountain, I understand perfectly as my mother’s smile comes into focus for the first time and then everything is light.

This poem explores the idea of liberty as the defying of prevailing social conventions and taboos recognising that such transgressions are invariably costly and leave guilt and shame in its wake.

I have tried to express this tension between constraint and breaking free of constraint in the form of the poem. The constraint is represented by the one room with its four walls where everything happens.  I have not used paragraph breaks and have justified the text to further reinforce a claustrophobic box-like effect.  The freedom is represented by the long uncontained sentences that stream wildly even without obvious pattern at first reading.

Time is another constraint. The poem happens in a single moment but time is also subverted and a whole lifetime is compressed into that moment as the unravelling backwards of an old man’s mind –  the first stanza his death throes, the last his birth.  I had in mind an inverted version of Walter Benjamin’s “angel of history” – the protagonist propelled into the past while he faces forward watching the pile of debris that is his life growing skyward before him.

The facts have some correspondence with the life of  Juan Ramírez de Lucas who had an intense affair with Lorca when he was a teenager. This relationship delayed Lorca’s flight to Mexico leading to his murrder by Franco’s falangists.  The rest of his life can be seen as coming to terms with the disgrance and the guilt like his volunteering for the Spanish “Blue Division” and his lonely years as an architectural critic. The poem uses words common in Lorca’s poetry that allude simultaneously to both the erotic and death – blood, water, iron and the moon.  The two lines taken directly from Lorca’s poetry are marked by italics.

Hopefully, the poem provokes an unbalancing.   That to choose freedom is to walk a tightrope – between glory and catastrophe, desire and destruction, self-actualisation and oblivion, yourself and the other. Losing our footing is inevitable eventually.  Nonetheless, we live in hope.