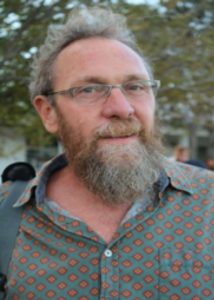 Michael Wessels was Associate Professor and chairperson of the Department of English at the University of the Western-Cape. His research explored new ways of reading San oral literature and the politics of indigeneity. He also wrote about the representation of place and spirituality in South African literature. Other teaching and research interests included postcolonial and Indian literature, romanticism, travel writing and ecocriticism. He was the author of Bushman Letters (Johannesburg: Wits University Press, 2010). He had published more than thirty accredited articles and chapters in books in his career. He loved wilderness, and in particular walking in mountains. And he had a deep knowledge of local flora and fauna. He was also passionately interested in creative writing, and had recently begun publishing his poetry in local literary journals. He sadly passed away during the 2018 Taking Liberties Cape Town project.

no tree or bush

to eye or mind

on a laden bullock cart

a woman haunts the dust

sari hanging from her bones

falls on its knees in the stones

the load from head to earth

hacks at the animal’s flank

with a claw of a foot

the great creature labours to its feet

foaming at the mouth

a vision of a drunk crawling up stairs

arrives from another world.

In this poem Michael Wessels creates an almost nightmarish world of human and animal suffering. As articulated in Michael’s own research and teaching, his poem testifies to a connectivity of the humana and the animal worlds. The woman in the poem is as borne down by the load on her head as the bullock is by the load he is pulling. And notice how the woman actually ‘hands’ her load over to the earth (‘wearlily she hands / the load from head to earth’). The earth too is sharing in – made a participant in – this awful weight carried by everyone in the poem. And what is this weight? It is both literal and figurative. In Buddhist tradtion it is the load of suffering borne by all in the world. This tradition was known intimately by Michael from his many and long pilgrimages through India and Tibet, and his time spent meditating in caves in the Drakensberg in  KwaZulu-Natal, where he encountered the San rock paintings that formed so much of his professioanl research and personal passion. And how to break free of this cycle of suffering? This cycle that sees the man travelling on top of the cart, while his wife walks behind carrying her own load. This cycle that sees the woman visiting her own pain and weariness upon the bullock, who can only foam at the mouth in response. And, then, this strange otherworldly image that visits the author in the last two lines, the ‘vision of a drunk crawling up stairs’. What do we make of this? Are we drunkenly crawling toward a future? In the tradition from whence this poems comes, it seems that only compassion for the earth and compassion for the bullock and for the woman and the man, can release us from the load on our heads.