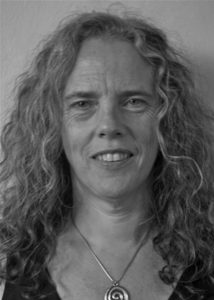 Julia Martin lives in Cape Town, South Africa, and is a professor in the Department of English at the University of the Western Cape where she has been working for many years in the field of what is now called the Environmental Humanities. She has published extensively in conventional academic media, but also has a special interest in writing creative nonfiction as a genre that admits the imagination as a way of knowing. Her travel memoir, A Millimetre of Dust: Visiting Ancestral Sites (2008) concerns archaeological sites in the Northern Cape. More recently, she collaborated with Gary Snyder in the publication of Nobody Home: Writing, Buddhism, and Living in Places (2014), a collection of their interviews and correspondence over three decades.

The first buildings were structures of discipline and containment, the straight lines, grey concrete and face-brick walls of an architectural modernism adapted to the service of apartheid. Within a few years of the parliamentary decision to establish separate universities, the University College of the Western Cape appeared in Bellville South, replacing a farm and a   diverse environment of coastal bush with a tidy design of lawns and garden beds that linked a Science block, an Arts block, an Education block, an Admin block with sports facilities and a library into a single concept.

The entity that this campus was designed to house and educate was what they called the Coloured (so that he could uplift his community, so that he could lead his own, this gesture from the white hands of the conquerors, for the guardian must provide for his ward). In documents from the mid 60’s that define and celebrate the institution (its special task, its magnificent project), the foundation of it all is a plan to secure in this location the unquestionable idea of race.

Young men of that time (and they were nearly all men) were required to wear ties and jackets. Young women (such as there were  – by 1966 only 12.5% of the total) were dressed in cotton frocks and court shoes. Promotional photographs show students gazing into microscopes, making their own beds, and viewing the indigenous plants that had been set to grow beside the concrete paths.

That the plants the planners chose for the new landscape were indigenous was, it seems, no accident. For indigeneity too was part of the rhetoric: their own place, their own people, their own local plants. The badge devised for the Coloured college set the columns of a Greek temple, that icon of culture and learning in the West, below three king Proteas. For not only was the Protea the national flower of the Republic and a plant that grew wild in the Western Cape. It was also (or so the rector explained at the time) a flower which our Coloured people cherish, thus typifying, he said, the appreciation which they have for their own.

By the late 1960’s, the built environment of the campus was well established, the labs were stocked with instruments and apparatuses, and there were ambitious plans for more and more development.  They had thought of almost everything, it seemed.

Yet for all their zeal, what the ideological architects crucially failed to imagine was how things grow.  Seeds must travel. Roots inhabit the soil. Trees, however neatly set in lines, will take their own shape. And human feet transgress the concrete walkways, treading their own paths into the world. In all their proud assertions the authorities had somehow not anticipated that, in building an institution of education, they were creating the conditions in which people could actually become educated.

The other thing the planners did not foresee was that assembling a number of the oppressed together in one place would enable them to organize. In 1970 the disciplined students burnt their university ties. Read more…

Please note that ‘An Open Space’ first appeared as follows:

I was asked to write something about the physical environment of the University of the Western Cape for a publication celebrating fifty years of the institution’s life. Write about the space, the editors said. The place. So I read whatever I could find about the early years of the institution, spread out architects’ plans, and walked about the campus, looking and listening. My hope, I suppose, was that if I paid close attention to the details, the place itself would tell a story: that the walls and spaces of the built environment, the planted gardens, the small remnants of the indigenous coastal ecology which these supplanted (these things together, as they reside in memory and in the present moment) might house a history. History, of course, is most of the time a narrative about human beings. But when you begin by looking closely at place(s) rather than people, the community of everyone else becomes more difficult to ignore. So while humans do appear to drive this story (of unfreedom and freedom and their entanglements), at the heart of it is an inside / outside space: a space that is open, possibly free. Read more…

SELECTED PUBLICATIONS: BOOKS AND SOME ESSAYS