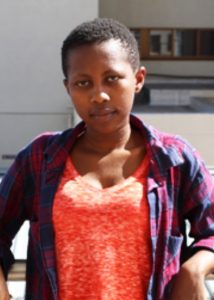 Nondwe Mpuma hails from the rural plains of Mount Ayliff, a small town in the Eastern Cape Province. She is a Creative Writing Masters student at the University of the Western Cape. Nondwe Mpuma is interested in the concepts of memory and time in literature.

The house is a box, a box of things
taken out and put in. People are
put in and taken out again. Going
in is a choice but leaving is a bowl
of spaghetti. Bars can be put on
the doors, sometimes they are
visible and other times they are
not. These bars are walls between
inside and out. This is a box
marked a home and unmarked a
house.

The House and Fufi Slide are creative pieces that came out of the Taking Liberties workshops where we explored the idea of liberty and what that means to us as individuals as well as a group of South African scholars at UWC. The House is written from exploring captivity within a space that some may view as home. The language is simple and I hope the idea of being detained within a space that is supposed to be very familiar to us, a place that becomes a ‘house’ instead of a ‘home.’ On the other end of the spectrum, Fufi Slide is written from a childhood experience. When I was in high school we were taken out for a geography trip to a farm outside of Durban where we stayed for a week. One of the activities that they had planned for us was a fufi slide over a dam. So instead of being harnessed, you would have a life vest on and you would hang on until you heard a whistle telling you to let go. You would have to let go in the middle of the dam. Those seconds of falling represent true liberation for me. The poem represents an exercise in playing with movement, focused on a few seconds of memory. I hope that when people read it they get some semblance of moving, falling. The workshops for me, made me realise that there are many memories, experiences and words waiting to be liberated.

Carrots the Wrong Way, An Anthology of Poetry and Prose about Food from the University of the Western Cape Creative Writing Programme, (uHlanga Press), 2017.