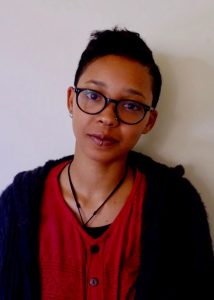 Lisa Julie holds a BA (Hons) in English literature from the University of the Western Cape. She is currently completing an MA in Creative Writing from the same university. Lisa was born in Cape Town and grew up speaking English and Afrikaans. She grew up in an area referred to as the Cape Flats, an area consisting of a vast number of townships in which coloureds and Africans live. She is deeply influenced by the culture and language of South Africans.

How we know the day is ending

The athaan goes off and the children run home. And we don’t see them again until morning

The street lights come on. The windows are shut and the curtains are drawn

The staff vans bring the daddies home. The police vans park and wait

The daddies call the big brothers from the corners. And the other boys hide the dice

The small children eat on the couches. The big sisters wash the babies

The daddies smoke on the stoeps. The mommies dry the nappies

The road is still and the big brothers unchain the dogs

The daddies roll up the prayer mats. And the mommies iron tomorrow’s clothes

The small children find their beds. The big sisters rock the babies

The house is quiet. The daddies lock the doors

The road is still and everyone goes to sleep

The whistling starts. And the manne stand in circles on the corners

The police vans start circling and the dogs start barking

The road is not still and we watch from the windows

Things no longer there

The glass of whisky. The only one he was allowed to have.

The comedy that followed. Whenever he was allowed more than one.

The hydrangeas in the centre of the table. Because he no longer had the energy to work in the garden.

The sixth chair. Because somebody needed to put something somewhere high.

The citronella oil candle. Because Ouma couldn’t take the smell and the miggies didn’t bother her anymore.

The hooters somewhere down the street. That fetched the neighbours for the night shift.

The shouting competing with the hooters. Because the children wouldn’t stop laughing and rocking on their chairs.

The neighbour’s idling tow-truck. That revved over Ouma’s prayer.

The two children. Because the schools weren’t good enough and because Ouma no longer had the energy.

The individual pieces are both set in a Cape Flats setting. This meant that I needed to use a specific kind of language and particular voices in order to make the works authentic – in order to make them believable. The people of the Cape Flats played vital roles in the liberation movement in South Africa. However, the socio-economic conditions in reason times, seemed to have worsened. This reality prompted me to write about the various forms of restraint and the limitations of freedom – the limitations of liberty.