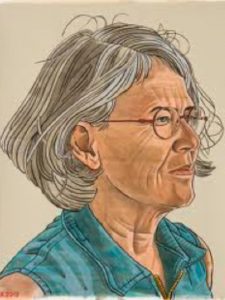 Antjie Krog is an Afrikaans poet, writer, journalist and Professor at the University of the Western Cape. She published twelve volumes of poetry in Afrikaans of which three volumes were compiled with English translations: Down to my Last Skin (2000), Body Bereft (2006) and Synaps (2014). She also published three non-fiction books: Country of my Skull (1998), on the South African Truth and Reconciliation Commission; A Change of Tongue (2004) about the transformation in South Africa after ten years and Begging to be Black (2009) about learning to live within a black majority. Krog has also co-authored an academic book There was this Goat (2009) with two colleagues Prof Kopano Ratele and Nosisi Mpolweni, investigating the Truth Commission testimony of Mrs Notrose Nobomvu Konile. Her work has been translated into English, Dutch, Italian, French, Spanish, Swedish, Serbian, Arabic and Chinese. Country of my Skull and A Change of Tongue have been nominated by South African librarians (LIASA) as two of the ten most important books written in ten years of democracy. She was also asked to translate the autobiography of Nelson Mandela, Long Walk to Freedom into Afrikaans.

Krog had been awarded most of the prestigious awards for poetry, non-fiction, journalism and translation available in Afrikaans and English, as well as the Stockholm Award from the Hiroshima Foundation for Peace and Culture for the year 2000, the Open Society Prize from the Central European University (previous winners were Jürgen Habermas and Vaclav Havel) and Gouden Gansenveer (2018).

how
how write
how do I write
how

it precedes my understanding    it tolls
justice    with a restless bounce I am being watched
by all of us  this is a call up a spitting fire
a garment of command commanding me: comply!

and the face becomes the foyer of my bewilderment

how
how write
how do I write

how in a way that I can love these cruel vassals of hate
how?   the fact is: I don’t love them
– I can’t even endure their faces

there is no will within me to love them
to, despite myself, nevertheless, love them
nowhere in me something is hesitating which can be wedged open
so that I can sufficiently want to want to love them

therefore I have to realise: my not wanting to love them
says something about myself: how veritable
dare I say is my love for you?
love is not like thirst the more I love you
the more I ought to love them
the less I love them the less perhaps I love you
my dearest most defenceless beloved love?

how
how write
how do I write

your face  conspicuous with the threads and scars from textures you had been dismissed from earlier
announces your bodily-ness: the emblem of dust
of the visibility of us all and the implosion of suffering when I make
eye-contact before the face gawks into the abyss

and then
how
how do I write

(Based on texts of Levinas and JM Coetzee)

Every one of us needs every one of us, as well as the beauty and resources of the entire world to be fully humane. That would be true Liberty. And in this, writing as a powerful intensifier of the conscience, chasing us into “the clearing of the truth of the world”, is critical and decisive.