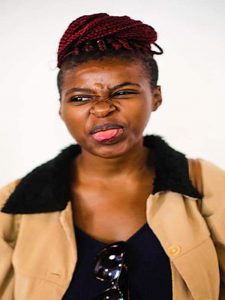 Sanelisiwe Nyaba is an Honours Student at UWC, a mother and a human facing the fear of calling herself a writer. She has aims of furthering her studies in Creative Writing and looks forward to the dreaded journey of painful growth both in writing and in life. She had a short story published in 2017 in the literary magazine New Contrast.

I guess then I am poor

They must not see it
written on your body
the smell of it
will water their eyes
they may sneeze you out
all of you
and then
they will cover their noses
to erase the sight of you.”

Well, nobody wants to be forgotten.

No sounds
of city trees and city birds here

And city skies
whose sun runs
across like a hedgehog

No sounds here
of city dogs and city cows

These are trying  times
to be a
mother black human
to be young and feel old
to be old and feel young
sometimes rain streams down
sometimes it comes like wet powder
sometimes the sun’s tendrils tickle my skin
sometimes it has prickly rays
the trees stand still, why cant you
because we think that we will not exist if we stop moving
because we think we cannot stand still to exist
and yet
the end of the stalk hovers higher
and the root reaps deeper
in its eternal home

My poetry is still of the age of a new born child. The idea of liberty and freedom are viewed from this contradicting perspective of youthfulness. I grew up in informal settlements. Struggle engulfed my own life and that of those around me. I do not remember feeling poor until I entered school and break time became awkward because I seemed to always lag behind on the way to the tuck shop. The idea of poverty having to be hidden comes from this experience; no one wanted to know whether you were poor or struggling, the same story became boring. So you did not speak of it until serious enquiries were made: that I did not come to school because I did not have money for transport, that I am late because I spent the first few hours of my morning knocking on neighbors’ doors to  borrow transport money. At least then you have an identity: the student that stays absent or that is always late or that does not care.

In the second poem, there is a sense of things functioning for themselves, as if everyone is on autopilot. The city has come to represent different things as time has unfolded. Many come here to work in order to support families they have left home. Others call the city home for its ability to inhabit different individuals and their unique ways of expressing themselves. Whatever the reason, we are all somehow tied to the city. Cape Town has a deep history of apartheid which makes itself so very blatant in the contrast between rich and poor. This brings into question the idea of democracy in present day South Africa.

The poem Stillness is a poem written for myself. I find myself a keen observer of those around me, how they affect me and vice versa. There is a need to stay moving and doing and creating in daily human life. I have always been fascinated by the calm and dignity that trees emit, as if watching us through their wisdom and pitying us in our world driven by human arrogance because humanity’s belief in our superiority blinds us from learning from the different forms of life which exist around us. Perhaps different life forms exist in order to teach us that inactivity does not mean death, that the noise inside our heads is not a sign of life, and it may in fact be a sign of death as it can be suffocating and stops us from seeing beyond what stands in front of us. This idea shatters the idea of freedom and dignity; it wants to argue that perhaps we have not even begun to grasp what freedom is, and therefore whatever freedom we exist in now may in fact be a form of imprisonment. The structure of this poem is a way of freeing me from myself specifically in the way that I have approached poetry structure and form.