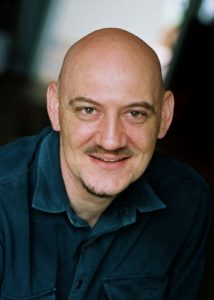 Kobus Moolman was born in Pietermaritzburg, South Africa. He is Associate Professor and Head of Creative Writing in the Department of English Studies at the University of the Western Cape. He lives with his wife in the Riebeek Valley. He has published seven collections of poetry, two collections of plays, and edited a collection of poetry, prose and art by South African writers living with disabilities. He has won numerous local and international awards for his work, including the 2001 Ingrid Jonker award, the 2007 South African Literary award for poetry, the Sol Plaatje European Union poetry award and recently the 2015 Glenna Luschei Award for African Poetry for his collection A Book of Rooms. He was also guest editor of the first special issue of a South African journal dedicated entirely to the teaching of creating writing, Current Writing. His first collection of short fiction, The Swimming Lesson and other stories, was published in 2017. He has also recently edited a special issue on contemporary South African poetry for the American journal, Illuminations. His poems and stories reveal his growing focus on the body and on issues of disability.

accept incompleteness as our blessing.

We who dress in blindness and in faith

do not know the colour of our palms

nor the weight of our feet upon the water.

We who have dust in our mouths all day

have stones on our tongues instead of songs.

We who quench fire with fire all night

know that wings are not the only ladders

to the dark, that heavy wood swims too

in the tide of the wind.

We who accept survival

accept survival as our curse.

Although first published in my collection Light and After in 2010, this poem is still one of the only pieces I have written in which I attempt to articulate, even sum up – in whatever halting and circuitous manner – a kind of philosophy or world-view; a struggle to say something that represents my moral value system. Even writing this now makes me feel self-conscious. Its grandiosity seems almost adolescent. But despite my reservations, the poem does seek to encapsulate the tensions and contradictions involved in putting forward what I believe about human freedom, human values and hope. Its many motifs are drawn from both the local political field (the images of singing, stones and fire are motifs of political protest drawn from South Africa’s anti-apartheid struggle, and the recent service delivery protests), and the general religious (‘the weight of our feet upon the water’).  But, intriguingly, the poem resists being read as a treatise or political pamphlet. It refuses to speak directly. It is deliberately cryptic. In its attempt to evoke its particular ‘message’ it speaks in a roundabout and contradictory manner. It is full of impossibilities that meet and become possible only in the language and the realm of the imagination. In the language of the future. Which is ultimately the language of survival and hope.

Light and After. Grahamstown: Deep South. 2010.

The Swimming Lesson and Other Stories. Pietermaritzburg: UKZN Press. 2017.